Carbon and a low carbon economy

Carbon emissions (and CO2 equivalents) are known to be responsible for global warming, so there is now a high urgency for a transition to a low carbon economy. Carbon emissions around the world are measured using various metrics and methods. How countries compare depends on a number of factors. For example, China has the highest total whereas countries like Qatar, the United Arab Emirates, and Australia have very high CO2 emissions per capita. Here are some useful sources of data. 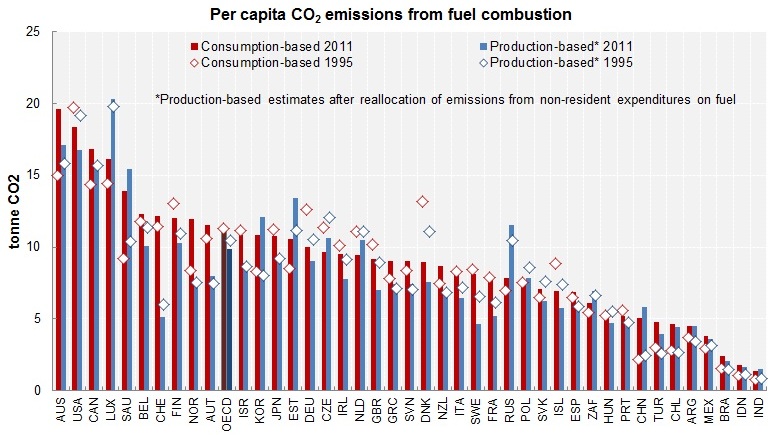 Carbon emissions around the world (2014)

Source: OECD dedicated website on carbon emissions around the world

Towards a low carbon economy – government

Governments have a critical role to play in the transition towards a low carbon economy and the Paris Agreement is a key mechanism of the United Nations which will help make this happen.

HSBC has produced a report, ‘Enabling a just transition to a low carbon economy’ (Dec 2018).

In November 2019, Climate Transparency produced the “Brown to Green Report”. It evaluates the G20 countries’ individual transition to a low-carbon economy, mapping achievements in their efforts to reduce emissions, adapt to climate impacts and green the financial system. It provides detailed profiles for the individual G20 members.

Towards a low carbon economy – business

Businesses around the world have been increasingly held to account in relation to carbon pollution and business now accepts must be regulated (for example, through a carbon price) and curbed if we are to minimise the effects of dangerous climate change.

Although there are certainly barriers to change, business can even benefit by reducing emissions. Here’s a 3 minute film from the UK Government about how some companies are interpreting the idea of a low carbon economy although the constraints of a finite world and the emerging impacts unsustainable growth remains a challenge for corporations.

Here’s a popular 6 minute film from the 21 Century Office (a WWF project funded by a grant from Hewlett Packard) summarises the benefits of and opportunities for cutting carbon. The film explores some of the ways carbon becomes embedded in products such as cars and computing infrastructure.

Carbon Nation is a feel-good documentary film about how businesses in the USA are cutting carbon. The film is available for purchase online or can be borrowed from Getting to Sustainability (conditions apply). Here’s the trailer:

Australian policies and research for a low carbon economy