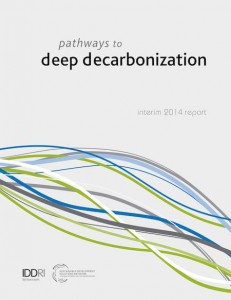 8 July, 2014: A United Nations (UN) committee has released a report which will pave the way for a UN climate change summit in New York this September, in the lead up to international climate change negotiations at COP 21 in Paris, December 2015.

The interim report seeks input and outlines pathways for major industrial economies to cut their carbon emissions by mid-century, calling for broad cooperation and “bold” action or the world will face dangerous and irreversible climate disruption.

UN Secretary-General Ban Ki-moon, said, “We know that we are not on track, and time is not on our side,” Mr Ban warned during a Headquarters press conference to launch the Deep Decarbonization Pathway Project report, produced by leading research institutes in 15 countries, is the first global cooperative program to identify practical pathways to a low-carbon economy by 2050.

“People need to understand why decarbonisation is necessary. They need to know it is possible. And they need to see that cutting emissions can benefit economics and people’s well-being.“

The full article and a video recording of the press conference is available at the UN News Centre.

A UN committee has released a report entitled, Deep Decarbonization Pathways, which shows how the major emitting countries can cut their carbon emissions by mid-century in order to prevent dangerous climate change.

The report, produced cooperatively by leading research institutes, is the first global cooperative program to identify practical pathways to a low-carbon economy by 2050.

The Deep Decarbonization Pathways Project (DDPP) interim report is being presented to the French government, as host of the 2015 United Nations Framework Convention on Climate Change (UNFCCC) climate conference. The interim report supports the UN Climate Summit on September 23, 2014.

The full DDPP report will be presented in the spring of 2015.

“The Deep Decarbonization Pathways Project report is an effort to demonstrate how countries can contribute to achieving the globally agreed target of limiting global temperature rise to below 2 degrees,” said Secretary-General Ban. “Ambitious national action is critical to averting dangerous climate change. This report shows what is possible.”

The report aims to help countries to set bold targets as they go into next year’s climate negotiations. It is issued midway in the project in order to support the deliberations at the UN Climate Summit on 23 Sept 2014. The report is a joint project of independent research teams in 15 countries, with around 30 participating scientific institutions.

“The world has committed to limit warming to below 2 degrees C, but it has not committed to the practical ways to achieve that goal,” said Jeffrey Sachs, director of the SDSN and of Columbia University’s Earth Institute. “This report is all about the practicalities. Success will be tough – the needed transformation is enormous – but is feasible, and is needed to keep the world safe for us and for future generations. One key message is to invest in developing the low-carbon technologies that can make a difference.”

Despite the global pledge to keep warming below 2 degrees, the world is currently on a trajectory to an increase of 4 degrees or more. According to the 2014 report of the Intergovernmental Panel on Climate Change (IPCC), such a rise would pose dangers that might exceed the ability of societies to adapt, including crop failures, drastic sea-level rise, migration of diseases, and extinctions of ecosystems. Some leading climate scientists, including the longtime NASA chief climate scientist and now Columbia University professor James Hansen, stress that even a 2-degree rise would pose great dangers, and that we should aim for less. But staying within the 2-degree limit is essential to maintain climate change within the boundaries of manageable risks.

The International Energy Agency’s chief economist, Fatih Birol, said: “The issue is to convince the world that the future is as important as the present. Paris 2015 may well be our last hope.”

The 15 national pathways all demonstrate the importance of three pillars for the deep decarbonization of energy systems:

Perhaps most importantly, the interim results demonstrate the critical importance of preparing national DDPs to 2050. “These pathways, and the discussion over their results and assumptions, are an essential tool for learning and problem solving,” said Emmanuel Guerin, associate director of the SDSN and senior project manager of the DDPP. “They are crucial to outline the long-term visions of deep decarbonization and shape the expectations of countries, businesses and investors about future socio-economic development opportunities.”

Laurence Tubiana, the founder of IDDRI and the special representative of the French government for the 2015 climate conference, said it is her “hope that this interim report, and the full report to be published next spring, will make a useful contribution to the structure and content of the debate by spurring the design and international comparison of national DDPs and by promoting the needed global cooperation to achieve them.”

The chapter on Australia was compiled by authors from ANU, ClimateWorks Australia, the CSIRO and Victoria University.

The report identifies that Australia’s economy is highly emissions-intensive due to the extensive use of coal in electricity supply which accounts for two thirds of greeenhouse gas emissions. Other drivers include a history of low cost enery, the role of agriculture in the economy (15% of total emissions including methane emissions from livestock) and long distance transport requirements. Mining and manufacturing contribute over one third of Australia’s total greenhouse gas emissions (a third of which are fugutive emissions).

On the positive side, the emissions intensity of Australia’s GDP has nearly halved. Although emissions from energy use has risen over two decades, this has been roughly offset by reduced deforestation and increased plantation forestry.

The report acknowledges there are many options available to Australia. The options described draw on existing analyses and feedback from over 40 industry and academic experts. However, views diverge on options such as carbon capture and storage (CCS), carbon forestry ad bioenergy.

The report states, “Australia can maintain economic growth and prosperity, and decarbonize by 2050. The results from the illustrative pathway show that betweennow and 2050, real GDP grows at 2.4% per year on average, resultig in an economy nearly 150% larger than today.”

Pillars of decarbonization (energy) include structural change (including changes in commodity demand, consumer preferences, growth in the service sector and plateauing of car travel). Other strategies include fuel switching, energy efficiency, electrification of transport (including a shift to rail and away from diesel), changes to industrial processes and fuel switching to gas or biomass where possible.

Energy transformation towards 100% renewable grid-integrated electricity with some gas fired electricity (particularly in remote areas) may be necessary as well as significant shifts towards bioenergy. 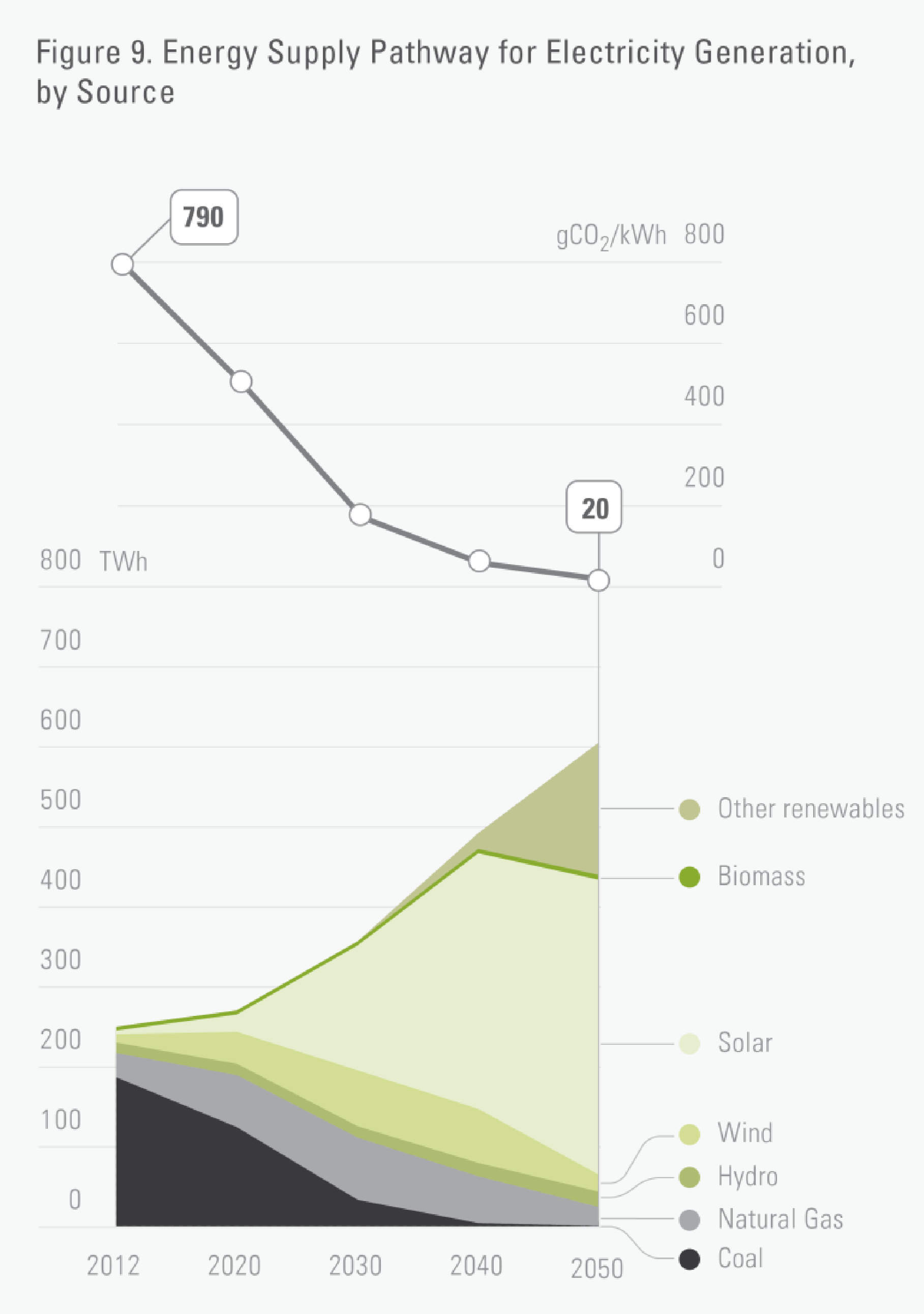 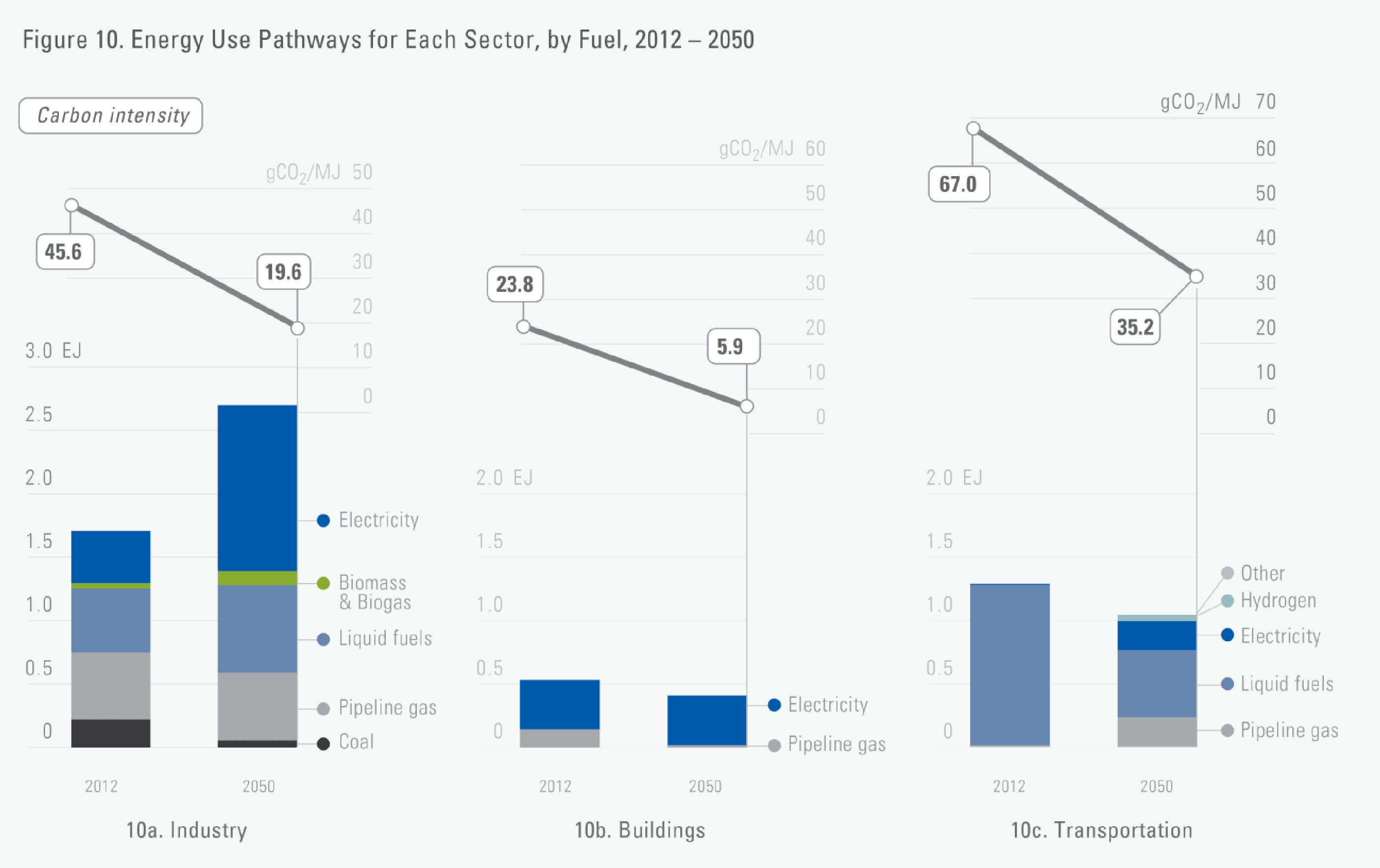 Reductions in industrial processes and fugitive emissions may deliver considerable reductions as well as best-practice farming and livestock production. There is also potential to offset emissions by planting and carbon farming techniques.

Greenhouse gas emissions from commercial and residential buildings reduce by 95% to 2050 due to significant energy efficiency, electrification of direct fuel use (e.g. gas for heating), and the use of decarbonized electricity. Energy use per square meter of commercial building and per residential dwelling decreases by approximately 50%. There is strong growth in distributed, grid integrated electricity generation, in particular rooftop solar PV.

A substantial shift from internal combustion engine vehicles to electric and hybrid vehicles, and to a lesser extent hydrogen fuel cell vehicles, results in over 70% improvement in the energy efficiency of cars and light commercial vehicles. Gas is used extensively for road freight. As a result, oil use for road transport decreases by 85% between 2012 and 2050 while vehicle kilometers travelled nearly double. Biofuels replace 50% of oil use in aviation, as this is one of the only decarbonization options currently available for this sector.

Soil and livestock emissions are reduced through the implementation of best practice farming techniques, in particular for beef (e.g. intensification of breeding, improvement in feeding and pasture practices, as well as enhanced breeding and herd selection for lower livestock methane emissions). In addition, a small relative reduction in beef demand is expected to result from increases in beef prices in a decarbonized world. Together, these factors drive a 45% reduction in emissions intensity of agricultural activity.

Australia has great potential to offset emissions via forestry bio-sequestration. Under price incentives for afforestation, large shifts in land use from agricultural land (in particular grasslands) to carbon forestry would become profitable. However, this would require significant development of supply chains as well as regional capabilities and workforces.

These include economic and technology leadership gains, biodiversity improvements and co-benefits include better air quality and improved health due to reduced fossil fuel use, increased production levels due to improved energy efficiency, and workforce productivity gains in more naturally lit and energy efficient workplaces.

Some key areas of focus include:

Transition to a decarbonized world will require new forms of international collaboration, and a concerted approach to collaborative national knowledge creation and problem solving.