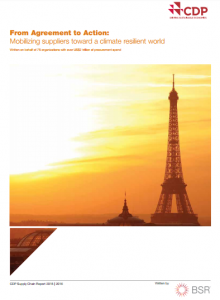 January 26, 2016: The largest ever study of climate data from suppliers and their customers has raised concerns about a lack of supplier carbon disclosure. The report has been produced by CDP in partnership with BSR. It is timely given the historic international deal agreed at the UN climate conference, COP21, and the news from Davos that climate change is the world’s most impactful risk(1).

CDP reports that major companies such as Dell, Unilever and Walmart are establishing the extent to which impending climate regulation will impact their business. However, half their key suppliers fail to respond to requests for climate information, hindering efforts to understand and manage climate risk.

The COP21 Paris agreement requires global greenhouse gas (GHG) emissions to reduce to net zero well before the end of the century. With supply chains responsible for up to four times the GHGs of a company’s direct operations(2), they house sizable regulatory risk but also present ample opportunity for businesses to lower emissions.

For this reason, 75 multinationals representing over US$2 trillion in procurement spend work with CDP – providers of the global environmental disclosure platform – to seek data from 7,879 key suppliers on their carbon emissions and climate risk strategies. Information was received from 4,005 suppliers, meaning 49% failed to fulfill their customers’ requests, creating a substantial blind-spot for those preparing for a carbon constrained world.

Paul Simpson, chief executive officer of CDP says: “The science and the policy have never been clearer. Greenhouse gas emissions must decrease to net zero as early as possible in the second half of the century. Companies have a vital role to play in implementing the Paris agreement. Those that are unable to do so risk being the losers from this inevitable transition.”

The report will concern savvy investors who are keen to reduce the risks inherent in a supply chain which is silent or not proactive when it comes to carbon disclosure and action on carbon emissions. Analysis of the suppliers that have disclosed demonstrates the scale of risk now facing companies: close to three quarters (72%) state that climate change presents risks that could significantly impact their business operations, revenue or expenditure. The majority (64%) of suppliers specifically identify climate regulation as a risk, with the most commonly cited consequences being fuel, energy and carbon taxes.

Despite the high perception of climate related risk, less than half (45%) the participating suppliers have set a target to reduce their emissions and just one third (34%) have lowered their GHGs in the past reporting year.

Aron Cramer, president and CEO of BSR says: “As we work toward catalyzing business leadership for a climate-compatible world, BSR is proud to have partnered with CDP in developing this report. Collaboration between companies and their suppliers is crucial when it comes to understanding climate risks and opportunities and is key to building inclusive, resilient, and transparent global supply chains. We believe there is a great opportunity to be captured if the millions of suppliers not yet reporting follow the lead of those who are. Widening the circle of reporters will spread the message further, wider and deeper, with decisive action that aids business, climate, and public health.”

The new report – which includes commentary from McKinsey & Company – suggests that carbon emissions and climate management are increasingly factored into procurement decisions and are disrupting established supplier-based business models. L’Oréal, for example, works with CDP to create supplier climate scorecards that can be easily understood in the purchasing department. The Coca-Cola Company and LEGO Group are both experimenting with incentives and training for suppliers that will improve climate performance and generate shared value.

Progress of carbon disclosure by corporations

The climate performance of suppliers that disclose to CDP improves with time. Those that have participated in CDP’s supply chain program for at least the past three years demonstrate a more robust approach to climate management than those disclosing for the first time. For example, around three quarters of the 1,850 repeat participants have climate risk management procedures in place and are actively reducing emissions. Fewer than half the 1,258 first time disclosers can claim these advantages, clearly demonstrating that measurement and disclosure lead to better management.

Regular disclosers are also better at realizing financial benefits. Repeat participants achieve an average of US$1.5 million in annual savings for each carbon cutting project, compared to first time disclosers, who average annual savings of US$900,000 per initiative.

The report goes on to note various ways that purchasing organizations can improve the climate performance and risk management of suppliers. The solutions included are scalable, and CDP has seen US Federal Government participation in its program as national administrations look to set their own supply chains in order.

To enable multinationals to benchmark their performance and drive improvements, CDP will this year score companies on the management of carbon and climate change across their supply chains, with results to be published in the 2017 supply chain report.

2 Committing to climate action in the supply chain, CDP, 2015.

About CDP
CDP, formerly Carbon Disclosure Project, is an international, not-for-profit organization providing the only global system for companies and cities to measure, disclose, manage and share vital environmental information. CDP works with market forces, including 822 institutional investors with assets of US$95 trillion, to motivate companies to disclose their impacts on the environment and natural resources and take action to reduce them. More than 5,500 companies disclosed environmental information through CDP in 2015. CDP now holds the largest collection globally of primary climate change, water and forest risk commodities information and puts these insights at the heart of strategic business, investment and policy decisions. Please follow us @CDP to find out more.

About BSR
BSR is a global non-profit organization that works with its network of more than 250 member companies to build a just and sustainable world. From its offices in Asia, Europe, and North America, BSR develops sustainable business strategies and solutions through consulting, research, and cross-sector collaboration. Visit www.bsr.org for more information about BSR’s more than 20 years of leadership in sustainability.

BSR and CDP are founding partners of We Mean Business, a coalition of organizations working with thousands of the world’s most influential businesses and investors to achieve a low carbon economy.