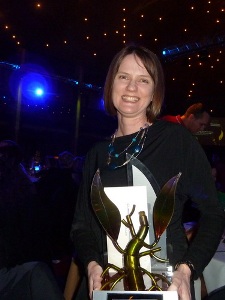 Ngaire McGaw is the Principal of Getting to Sustainability, based in Brisbane. She is an experienced project manager of sustainability and change projects – at the community, household, and organisational levels. Ngaire is the recipient of a number of awards for her work projects, post-graduate studies, and volunteer roles. She has presented papers at a number of national/state conferences.

Ngaire is an experienced and qualified health promotion practitioner. For two decades, she has been planning, implementing and evaluating evidence-based public health initiatives. Ngaire has played a lead role implementing numerous intersectoral and multi-stakeholder initiatives. She has delivered outcomes for the health sector, schools, all levels of government, and the community sector. Ngaire has worked in non-profit organisations including peak bodies/professional associations. Her projects have included a TravelSmart Schools initiative which won national recognition from Australia’s Cycling Promotion Fund.

As above, Ngaire currently works for a hospital in Brisbane – a non-profit private enterprise. In her early career, Ngaire worked in marketing and/or event management roles for almost a decade.  During this time, she worked in professional associations for tax lawyers and accountants, doctors, and performing artists. Ngaire worked at Arnott’s Biscuits as Promotions Officer.

Other studies and training

For more about Ngaire’s background, visit her LinkedIn page here.