10 March 2015: A new report from ClimateWorks has found Australia could nearly double its energy productivity by 2030, delivering significant benefits to the economy and a substantial reduction in greenhouse gas emissions. 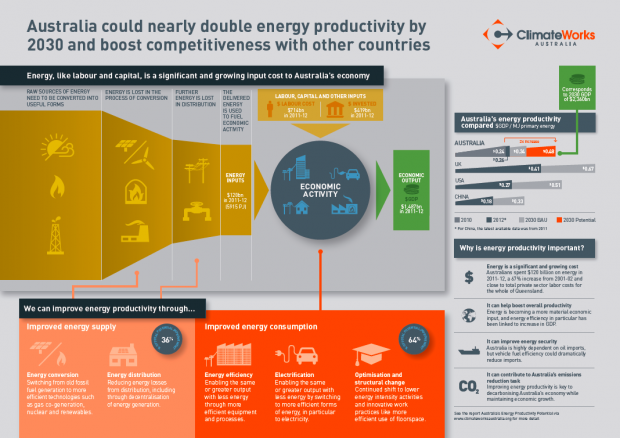 “The report shows about half of the potential increase in energy productivity can be achieved through energy efficiency activities in our homes, offices, buildings, vehicles and industries. This includes simple measures like using LED lighting and more efficient heating and cooling systems to the automation of some industrial processes and improving energy data systems.

“A further 36 per cent of the potential can be realised by switching from old fossil fuel generation to more efficient technologies such as gas co-generation and renewables and reducing energy losses that occur through the energy distribution process.

“The remaining potential can be achieved through electrification in the transport and industry sectors. For example, switching to electric cars or using electric conveyors instead of mining trucks to move materials.”

How does Australia’s energy productivity compare?

Ms Skarbek said an ambitious national energy productivity target similar to the one introduced in the United States would help accelerate improvements across the economy.

“Australia has made some progress in energy productivity but currently lags behind many other countries,” she said.

“The United States recently announced it would double its energy productivity by 2030 while China and the European Union have also taken strong energy efficiency action to increase productivity and reduce emissions.

“The Australian Government’s Energy White Paper provides an opportunity to develop an Energy Productivity Plan that includes a national target and can help Australia keep pace with improvements expected in other G20 countries.”

“Energy productivity improvements, particularly through the implementation of many profitable energy efficiency opportunities, can help reduce expenditure on energy, or ensure that there is a greater economic return for every dollar spent on energy.

“Improving energy productivity would also help reduce Australia’s increasing reliance on oil imports which constitute over 90 per cent of our oil use today.

“Energy use also accounts for more than 65 per cent of Australia’s greenhouse gas emissions, so improving energy productivity will help achieve our emissions reduction goals.”

Ms Denis said Australia could achieve its full energy productivity potential if there was a greater push to accelerate the uptake of recent technology advancements.

“The report shows the technology is available for Australia to modernise its energy system and dramatically increase its energy productivity by 2030,”she said.

Companies such as food and agri-business Simplot Australia are showing that ambitious improvements in energy productivity are achievable. Simplot’s 2014 Sustainability Report shows that it has already reduced energy consumption per tonne of production by 12 per cent compared to 2008 levels, and is targeting a 25 per cent improvement by 2018.

Energy efficiency is generally a cost saving, and while increasing electrification and moving away from old fossil fuel power stations involves increased investment today, these costs are continuing to fall.

Kate Carnell AO, CEO of the Australian Chamber of Commerce and Industry, said: “Improving living standards in Australia requires us to improve productivity, including in our energy use. This report shows Australia has enormous potential to more efficiently use its endowment of energy resources. A more productive use of these resources will create new jobs and investment opportunities while also lowering costs to business. Better energy productivity is good for the economy and good for the environment.”

For a copy of Australia’s Energy Productivity Potential report go to: http://climateworks.com.au/project/current-project/australias-energy-productivity-potential