The Climate and Health Alliance, together with the Public Health Association of Australia, has released a new short film: The Human Cost of Power. Produced by Fiona Armstrong and directed by award winning science journalist Alexandra de Blas, this film explores the health impacts associated with the massive expansion of coal and unconventional gas in Australia.

The film draws on new reports and evidence which offer fresh insights into the risks posed to human health by the production of these energy resources.

The Human Cost of Power has received international attention, featuring in a session at the Global Climate and Health Summit held in parallel with the United Nations global climate talks in Warsaw in November, as well as at the international Health Impact Assessment conference. The film has also been selected to screen, in competition, at the Think Forward Film Festival in Venice in December 2013.

Climate and Health Alliance convenor and film producer Fiona Armstrong said the international interest in the film highlighted the growing gap between Australia and the rest of the world in its willingness to face the reality of climate change.

“While our government buries its head in the sand on climate change, the rest of the world is working on solutions. We’re pleased to be able to share this film with the world about the harm that Australian coal and unconventional gas is causing to the health of people in our country and around the world, and to highlight the unprecedented surge in global emissions being caused by the massive expansion of mining coal and gas in Australia.”

Film director Alexandra de Blas says the film features insights from public and environmental health research that are poorly understood in the community and not considered in decisions to approve new and expanded coal mines and gas projects.

“The health risks to people from coal and unconventional gas are not widely known in Australia or taken into account by governments and industry. In addition to that, the expansion of these industries in Australia poses dramatic risks for the global community because of their contribution to climate change. This film allows the voices of these health and environmental experts to be heard – we hope our nation’s leaders, and those of other countries, are listening.”

“Cleaning up our energy supply system, cutting national emissions, and contributing to a global climate agreement are all significant public health issues – we urge the Australian government to act in the interests of the local and global community, and commit to addressing these issues to protect and promote health and well-being.”

View the Human Cost of Power

You can view a trailer of the film, as well as the short (5 mins) version and full length version (16 minutes) on the Climate and Health Alliance YouTube channel.

For more information on the research reports behind the film visit the CAHA website here.

Background to The Human Cost of Power

The mining and production of Australian coal and coal seam gas is expanding at an unprecedented rate and scale and with it the risk to human health. 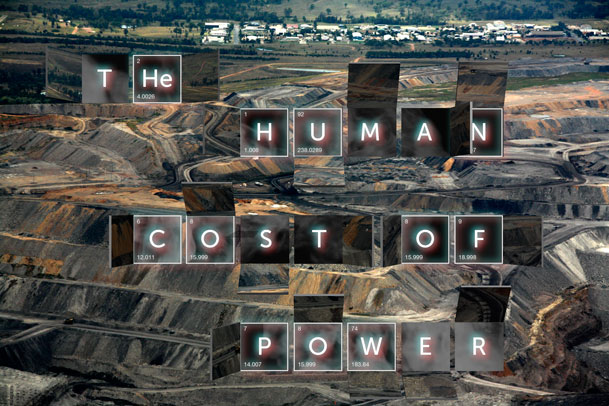 In addition, exploitation of these resources in Australia has the potential to drive global warming beyond the two degrees guardrail scientists warn is the upper limit if we are to avoid precipitating catastrophic and non-linear changes to the global climate system.

The film communicates the best available international science in an accurate and engaging way. It features Australian public and environmental health experts and draws on new reports and evidence which offer fresh insights into the risks posed to human health from coal and gas.

The Human Cost of Power film is part of a broader strategy to engage policymakers, the health sector and the community on the risks to health from climate change and fossil fuels. The film will be used to elevate the seriousness of the health impacts associated with coal and coal seam gas in the minds of decision makers, health professionals, educators, and the wider community in Australia.

The film is available online, and is being provided to university faculties of public health, used at forums in communities affected by coal and coal seam gas projects, and distributed via social media.

The Human Cost of Power makes an important contribution to raising public awareness of the topic in Australia and internationally.

About the Climate and Health Alliance (CAHA)

CAHA was established in August 2010 and is a coalition of health care stakeholders who wish to see the threat to human health from climate change and ecological degradation addressed through prompt policy action. This commitment is based on the understanding that further global warming poses grave risks to human health and biodiversity and if left unchecked, threatens the future of human civilisation.

The impetus for the establishment of the Alliance was the call from the May 2009 issue of the international medical journal The Lancet calling for a public health movement that frames the threat of climate change for humankind as a health issue.

CAHA’s members recognise that health care stakeholders have a particular responsibility to the community in advocating for public policy that will promote and protect human health.

In advocating for policy action to prevent further global warming, CAHA recognises that this must include dramatic and urgent reductions in greenhouse gas emissions and removal of excess carbon dioxide from the atmosphere to restore a safe climate.

The Alliance aims to contribute to the development and implementation of evidence based public policy to protect the community from the adverse consequences of climate change, and promote recognition that policies to reduce greenhouse gas emissions and protect the environment have the potential to bring important public health benefits.

CAHA aims to facilitate collaboration in the sector for the development of effective responses to climate change as well as promote sustainable practices in health care to reduce the sector’s environmental footprint.

About the Public Health Association of Australia (PHAA)

PHAA is a national organisation comprising around 1900 individual members and representing over 40 professional groups concerned with the promotion of health at a population level. 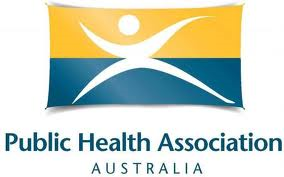 Key roles of the organisation include capacity building, advocacy and the development of policy. Core to its work is an evidence base drawn from a wide range of members working in public health practice, research, administration and related fields who volunteer their time to inform policy, support advocacy and assist in capacity building within the sector. PHAA has been a key proponent of a preventive approach for better population health outcomes championing such policies and providing support for policy-makers.

In recent years PHAA has further developed its role in advocacy to achieve the best possible health outcomes for the community, both through working with all levels of government and promoting key policies and advocacy goals through the media, public events and other means.