June 2014: Swinburne’s innovative new Advanced Manufacturing and Design Centre (AMDC) is open for use and allowing students to collaboratively work and learn in an environmentally friendly space. 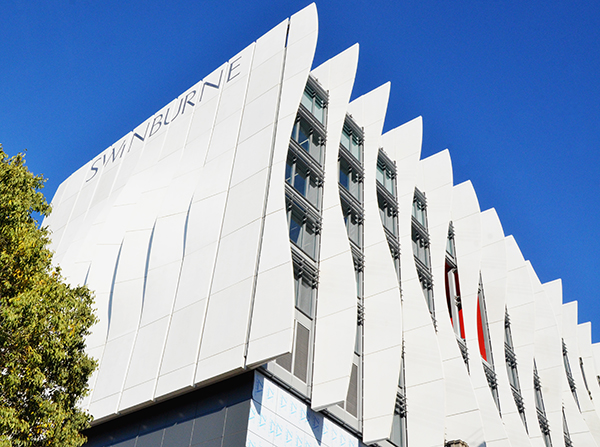 With floors one to six, including classrooms, laboratories and café-style lounge recently open‌ing, Swinburne’s second 5-star Green Star building, certified by the Green Building Council of Australia, is a stand out on Burwood road, Hawthorn, with its striking façade.

Swinburne Vice-Chancellor and President, Professor Linda Kristjanson, said the building had been designed to ensure it left a minimal carbon footprint.

“The AMDC has been made from materials that encourage natural light and self-generation of electricity,” Professor Kristjanson said.

“This has been made possible through the design of the central atrium, which creates a well of natural light that filters through the floors, combined with the rippling exterior vertical fins which have been designed to meet the winter and summer angles of the sun.”

The AMDC is also encouraging students to leave their cars at home, and instead opt for riding their bikes to university, with 140 new bicycle spaces being made available.

While the remaining floors of the ten storey building will not be unveiled until later in June, including the engineering and design student work spaces, the state-of-the-art 274-seat lecture theatre is already in use.

Swinburne Associate Director of Major Projects Vince Persi, who oversaw the design and construction of the project, said that the AMDC created a welcoming atmosphere for students and staff.

“Not only are the indoor spaces great, but the building also has an outdoor sky garden on level three, with landscaping, decking and a vista across tree tops and the city skyline. This provides an extension of the traditional workspace, while allowing students to step out and get some fresh air,” Mr Persi said.

The AMDC cost $100 million and was built with the support of the Commonwealth Government, which provided $40 million through its Education Investment Fund.

Construction on the building, which was designed by UK-based Wilkinson Eyre Architects with Sinclair Knight Merz (SKM) Service engineers, started in March 2012.

A pdf fact sheet about the design of the AMDC is available here.