After the passing of Australia’s carbon price legislative package in November 2011, marketing and social research firm, IPSOS conducted a survey about consumer attitudes to the carbon price and correlated these to their beliefs around climate change and their willingness to take personal action. The nine page summary report highlights the complexity in behaviour change and indicated there somewhat of a contradiction between behaviour and the degree of concern about predicted impacts of climate change. *Report highlights are below.

Another IPOSOS report called Acceptable Behaviour, notes that while on one hand people agree governments should intervene in specific areas, there was still resistance to the carbon price, particularly among those who were not convinced that climate change is real.

However overall, most people think that the Federal Government is responsible for taking action to address climate change despite the apparent resistance to the carbon price.

*Highlights from the IPSOS 2012 climate change and behaviour report:

NB: The findings here are based on climate change tracking research undertaken in late 2007, 2008, 2009, 2010, and 2011 and is supported by results of other Ipsos research conducted in relation to sustainable consumption and climate change. 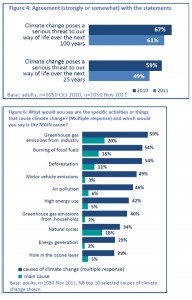