Reproduced with permission from RenewEconomy – story by Giles Parkinson, 7 July 2014

As Prime Minister Tony Abbott pushes for the new Senate to repeal the carbon price in its first few days of sitting, his conservative government is coming under new pressure to do an about-face and leave the door open for at least the purchase of international permits.

A group of senior economists, the Climate Change Authority and The Climate Institute and other green groups all argued that in the fact of growing international action and the move towards a binding treaty in Paris, Australia’s carbon-intensive economy would be left completely exposed with the current policy sittings.

The Climate Institute said that repealing the carbon price was equivalent to delivering a subsidy of $15 billion to the fossil fuel industry, particularly coal-fired generators. This subsidy was being delivered as the government looks to suppress a much small subsidy by repealing, or cutting back, the renewable energy target at the behest of those same coal-fired generators.

The Climate Institute was joined by a group of 59 economists, the Climate Change Authority, environmental groups and the Carbon Market Institute to say the policy certainty was critical for the economy, and the least that should be done is to provide an avenue for Australia to meet its minimal emissions targets through international permits.

This echoes a push by Professor Ross Garnaut last week, and a rather confused and unclear policy ambit by Clive Palmer’s Palmer United Party, which now has a considerable slice of the balance of power in the Senate.

All groups argued that this position had the implicit support of industry and big business, who argued for policy certainty and did not accept that Direct Action, or any of the government’s proposed climate policies, provided that.

Typically, though, Australian big business has been virtually mute on the matter.

The Climate Institute says using the International Monetary Fund’s approach to energy subsidies and the “social cost” of pollution, the repeal of the carbon price amounted to a subsidy of up to $15 billion to the major polluters. “Repeal of the carbon laws will be a shattering and historic loss that will relieve companies of responsibility for their pollution,” CEO John Connor said in a statement.

“Using conservative US Government estimates of the economic cost of climate change shows that in the absence of a carbon price, or regulated emissions limits, Australia’s top 10 major emitters will be subsidised to the tune of $6-$15 billion annually. This approach mirrors the International Monetary Fund’s approach to assessing energy subsidies.” 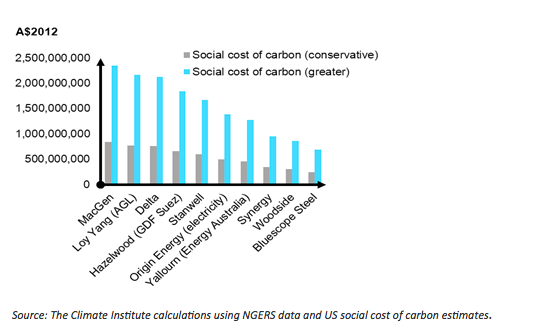 Connor said the proposed Emission Reduction Fund – the centerpiece of Direct Action – “does not add up to a credible, sustainable or effective climate policy.” He suggested a range of “stop-gap” measures that include a strategic reserve of government funds to purchase of international emission credits, expansion of the Renewable Energy Target, mechanisms to ensure the timely market exit of ageing high-carbon power generation and mandatory vehicle emission standards.

The Climate Change Authority has also taken up the argument on international permits (Ross Garnaut did the same last week), arguing that it could meet its current targets – and the higher targets that the CCA has recommended – at relatively low cost. The CCA released a paper identifying the sort of permits that Australia could buy – at a cost of less than $1 a unit.

The CCA has argued that Australia should lift its current target of a 5 per cent reduction to at least 19 per cent. CCA chairman Bernie Fraser, a former Reserve Bank governor, said Australia should be gearing up now to participate in international markets to help ensure that its emissions reductions targets for 2020 (and beyond) were pursued in cost effective ways.

He noted that Norway, Austria, Sweden, and France have established government funds to purchase international units, and the European Union, Norway, New Zealand, Korea and South Africa allow direct access to international markets by private entities. This would be simple to implement and there was strong support among both industry and environment groups for Australia to follow this course.

The issue of pricing carbon was taken up by 59 Australian economists, who signed a letter in support of a carbon price and a limit on emissions. Former hedge fund strategist Geoff Weir said relying on Government advisers and officials to pick the best emerging new technologies – as Direct Action is designed to do – “is guaranteed to be substantially less efficient, less effective and less equitable than relying on a carbon price to alter incentives.” He said economic theory and Australia’s earlier experience with industry assistance confirm that view.”

The economists said a well-designed price and limit on carbon pollution would provide stable and long-term policy settings that improve certainty for business; greater confidence that emission reduction targets will be met; lower administrative cost and complexity; can link to other international schemes; could provide incentives for consumers to reduce their demand for emissions-intensive goods; and could incorporate of the cost of the damages caused by carbon emissions into business decisions.

“As young people, we have the most at stake and we need our leaders to listen and act urgently,” said Lucy Manne, Co-Director of the AYCC.

“Young Australians have grown up learning the science of climate change and it doesn’t make sense to us that despite the overwhelming evidence, our government is still failing to act,” said Manne.

“Our message to new Senators is this: think about your children and grandchildren, the future generations who will bear the cost of your decisions on climate.