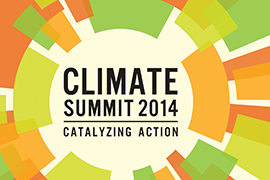 that cannot be ignored, and, importantly, that they are ready to work together to bring down emissions. Seventy-three countries and 11 states and provinces – together responsible for 54 per cent of global greenhouse gas emissions and 52 per cent of GDP – joined 11 cities and over 1,000 businesses and investors in signalling their support for pricing carbon through a series of initiatives being announced at the UN Secretary-General’s Climate Leadership Summit on 23 September 2014.

The list includes countries like China and South Africa that are planning carbon pricing, as well as Russia and countries at high risk from climate change, like the Marshall Islands. It includes business ranging across industry, energy and transportation, and institutional investors with more than $24 trillion in assets.

[Update: The count rose during the Summit to 74 countries and 23 subnational jurisdictions with the additions of the Czech Republic and Lagos State].

This is a wake-up moment. Carbon pricing if expanded to this scale and then globally has the potential to bring down emissions in a way that supports clean energy and low-carbon growth while giving businesses the flexibility to innovate and find the most efficient choices.

“The science is clear. The economics are compelling. We are seeing a shift toward the economic architecture that will be necessary to avoid a 2-degree-warmer world, an architecture that supports green growth, jobs and competitiveness,” said World Bank Group Vice President and Special Envoy for Climate Change Rachel Kyte.

To move carbon pricing use and understanding forward, the World Bank Group, World Economic Forum, and We Mean Business Coalition announced that they would convene a carbon pricing leadership coalition with business and government leaders.

Pulling together for a global cause and pricing carbon

Carbon pricing brings together two distinct groups that have each spoken in favour of climate action but rarely worked together to address climate change: governments, which have been testing carbon trading systems and carbon taxes, and businesses that have started setting internal “shadow” carbon prices to help guide decisions for a cleaner future.

On the government side, nearly 40 countries and more than 20 cities, states and provinces, from British Columbia to Tokyo, are demonstrating the benefits of carbon pricing or plan to start soon. China is the latest to begin testing the waters, with seven local pilot carbon markets that are helping the government plan for a national carbon trading system.

In the private sector, there is a wide belief among business leaders that carbon will be priced, and preparations are already underway in several companies. More than 150 large businesses are using internal carbon pricing in their decision-making, and more than 600 large companies see regulations creating new business opportunities, according to CDP’s latest corporate survey.

Working together, climate-smart policies can help businesses direct their investment decisions to clean solutions and can also provide greater transparency for investors who worry about stranded assets and resilience for the future.

Business and government leaders mentioned those and other reasons when they aligned themselves with the Put a Price on Carbon Statement. Other business leaders and investors added their public support for carbon pricing by signing the Carbon Price Communiqué, the Caring for Climate Initiative, and the 2014 Global Investor Statement on Climate Change.

Vietnam’s coastal communities and low-lying farms are among those already dealing with the damage of rising sea levels and ocean acidification. A price on carbon would help catalyze green investment and could drive energy efficiency and low-carbon measures that could generate billions in economic savings, said Prime Minister Nguyễn Tấn Dũng.

Quebec started with a tax on fossil fuels and a goal to reduce emissions by 20 per cent below 1990 levels by 2020. It launched a carbon trading system in 2012 that is now linked with California’s.

“We are encouraging our businesses to become more energy-efficient, adopt clean technologies, and use renewable forms of energy,” said Quebec Premier Philippe Couillard. That means modernizing business models. “Decisions made by companies should reflect the high environmental, social and economic costs associated with climate disruptions.”

Couillard and California Governor Jerry Brown added their public support for carbon pricing through the Put a Price on Carbon Statement, organized by the World Bank with support from several partners.

Businesses are looking for consistency & flexibility in pricing carbon

Companies that joined the Put a Price on Carbon statement say they are looking for policy consistency and flexibility in how they reduce emissions. Carbon pricing policies allow them to innovate and find the most successful solutions for their industries.

“An effective system will increase incentives for the aviation industry to accelerate the introduction of low-carbon technology and lock in the great potential to decarbonize air transport,” said William Walsh, CEO of International Airlines Group, the parent company of British Airways.

Unilever, which includes food and consumer products, knows the risks that extreme weather can create for supply chains, particularly for water security and agriculture. “Many of the impacts of our operations fall outside our direct control so we need to engage governments to create an environment that is supportive to meeting the big sustainability challenges the world faces,” the company wrote when it joined the Put a Price on Carbon statement.

For institutional investors like the Australian pension fund Catholic Super, transparency is important for investing in the future. Institutional investors have been encouraging the businesses they invest in to shift to cleaner energy and low-carbon growth. They are a powerful voice – together, the more than 340 investors who signed the 2014 Global Investor Statement on Climate Change control more than $24 trillion in assets.

Factoring carbon emissions into production “is absolutely essential if we are to do our part to help transform the world’s energy systems, while at the same time ensuring supply security at affordable prices,” wrote E.On, a European utility. “Without the price on carbon, it is difficult for companies to make investment decisions and therefore impedes investments in climate-friendly technologies.”

A price on carbon enables all sectors – private, government, and the general public – to factor the cost of greenhouse gas emissions into everyday decisions, said Anthony Earley, the CEO of U.S. utility PG&E. “The sooner we begin to incorporate these costs, the better.”