16 January, 2015: Responding to the publication by the NASA Goddard institute for Space Studies and the National Climatic Data Center at the National Oceanic and Atmospheric Administration of figures showing that 2014 was the world’s hottest year since records began in 1880, Bob Ward, policy and communications director at the Grantham Research Institute on Climate Change and the Environment and the ESRC Centre for Climate Change Economics and Policy at the London School of Economics and Political Science, said: 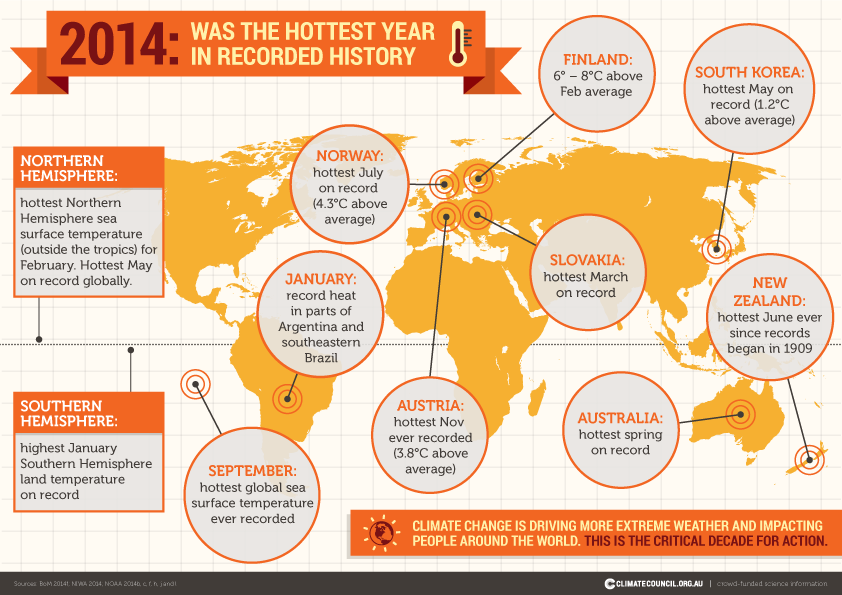 “The new global temperature record announced today completely exposes the myth that global warming has stopped. The truth is that the rate of increase in global average surface temperature over the past 15 years has temporarily slowed to about 0.05 centigrade degrees per decade, but it is likely that it will pick up again in the future if atmospheric levels of greenhouse gases continue to rise unabated. Measured over the period since 1951, global mean surface temperature has been rising at about 0.12 centigrade degrees per decade.

“There is mounting evidence all around the world that the Earth is warming and the climate is changing in response to rising levels of greenhouse gases in the atmosphere. Carbon dioxide levels are close to 400 parts per million, 40 per cent higher than they were before the Industrial Revolution, and probably higher than they have been for millions of years. The polar ice sheets and glaciers are shrinking, global sea level is rising at an accelerating pace, and the risks of heatwaves and heavy rainfall are increasing in many parts of the world, including the UK, which has just experienced its hottest year on record.

“No politician can afford to ignore this overwhelming scientific evidence or claim that global warming is a hoax. Climate change is happening, and as the Intergovernmental Panel on Climate Change, national scientific academies and scientific organisations across the world have all concluded, human activities, particularly burning of fossil fuels and deforestation, are primarily responsible.

“The record temperatures last year should focus the minds of governments across the world on the scale of the risks that climate change is creating, and the urgency of the action that is required, including an international agreement to strongly reduce greenhouse gas emissions, to be reached at the United Nations climate change summit in Paris in December 2015.”

The ESRC Centre for Climate Change Economics and Policy (http://www.cccep.ac.uk/) is hosted by the University of Leeds and the London School of Economics and Political Science. It is funded by the UK Economic and Social Research Council (http://www.esrc.ac.uk/). The Centre’s mission is to advance public and private action on climate change through rigorous, innovative research.